It’s been a while since we were last on the Grouse: a time when the pandemic had yet to hit and the mountain was still fully covered in snow.

Then four and half months later, it’s July. Grouse gondola reopened after months of closure. As planned, we got up Grouse Mountain via the gondola, and started off the hike at around 11:30 am from the Chalet.

The first 1/3 of the trail was effortless and steady ascent along Alpine Trail. We kept a cadence of about 20 min per kilometre for the first half (2.7 km), up to the fork that leads to Goat Mountain. From there began the next 1/3 — sharp drop along the ridge into Crown Pass. 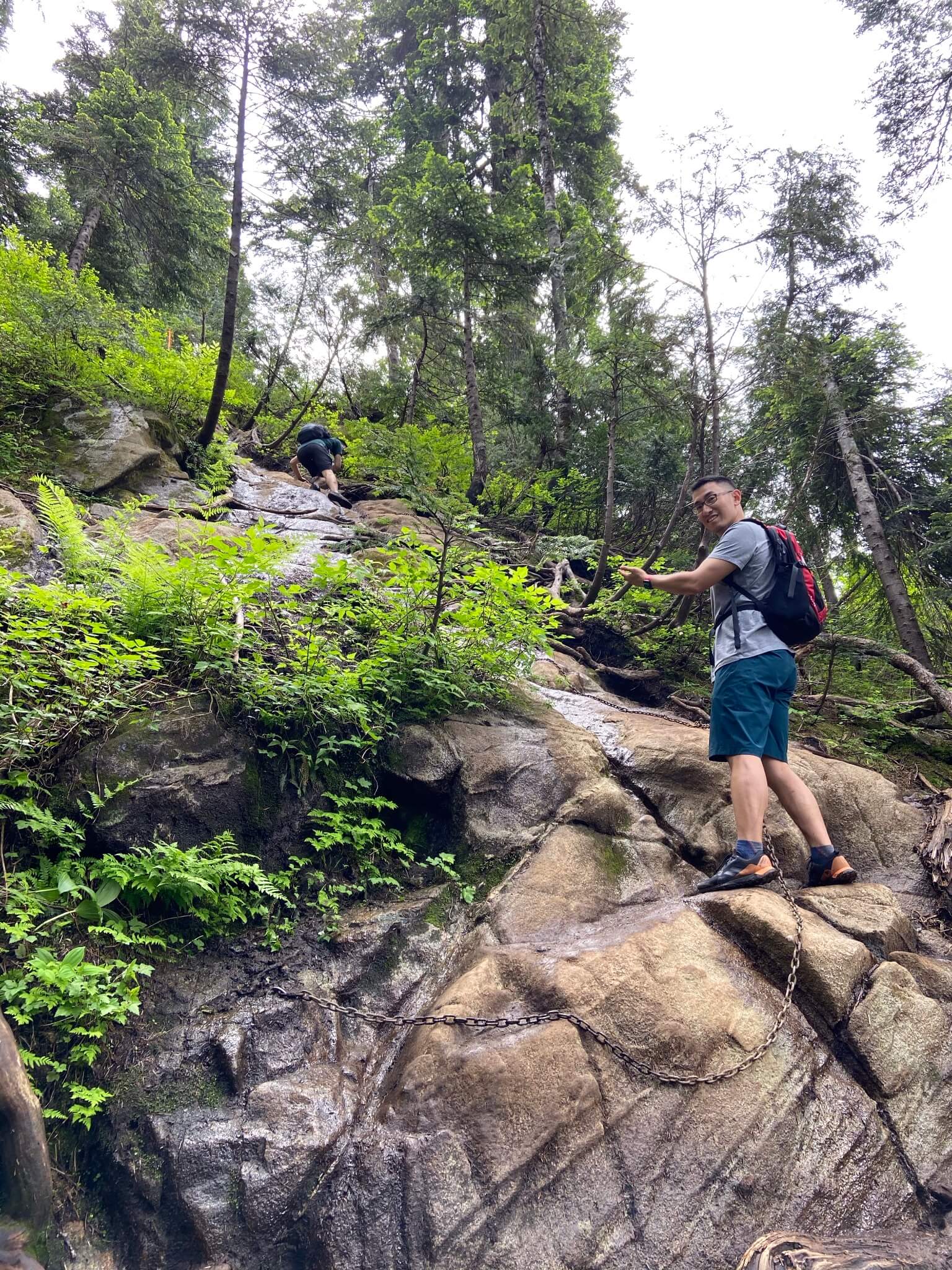 Descending to Hanes Valley from the Goat Mountain fork.

The descent gave us a taste of what the challenge of Crown Mountain Trail is mostly about. Part of the trail was still muddy from the melting snow, but thankfully no crampons were necessary to make a safe descent. We did, however, rely on full-body strength and use the rocks and trees and roots. Chains were also available in one area of the slope.

We could briefly catch a breath once in Crown Pass. The views were breathtaking into Hanes Valley on our right-hand side. On our left was Burrard Inlet in the distance, as well as Point Grey and the cities. We prepared ourselves for the scrambling onto Crown Mountain — twice as high as our descent from the Goat Mountain fork. 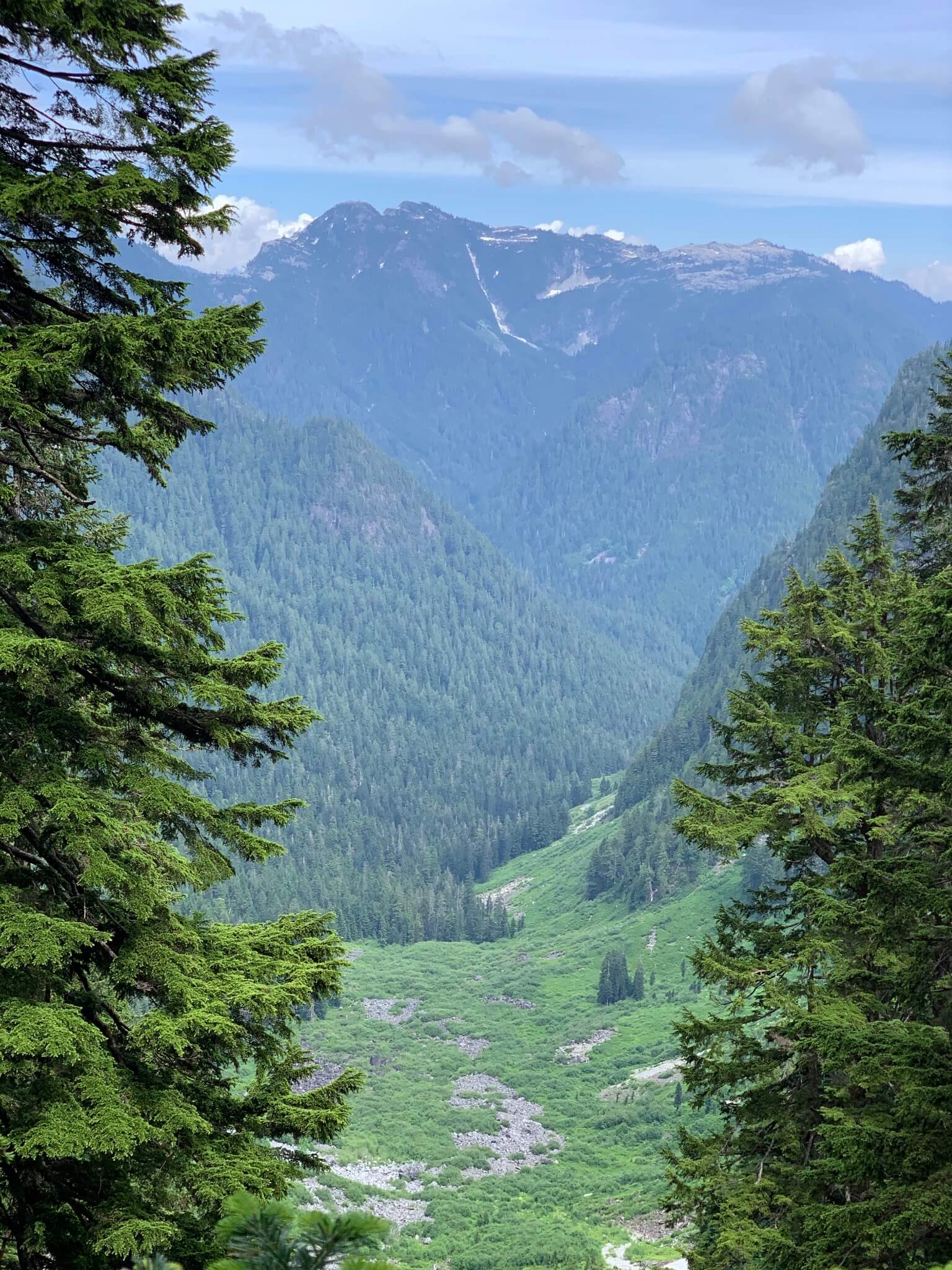 Hanes Valley on the right-hand side of the trail. The Hanes Valley Trail connects all the way to Lynn Valley, a 10-hour hike with 1,200 m ascent and 18 km distance. Chen jokingly said we should do that the next week. We didn’t.

The ascent was no joke. This part of the trail has a horizontal distance of 1 km but altitude gain is 500 m. The terrains were just as muddy and challenging from the melting or melted snow, until we reach a brief flat. From there, the terrains turned rocky and exposed. The sun was not too bad, but we definitely felt the mild scorch. The higher altitude brought some coolness, and it wasn’t as humid as in the trees. 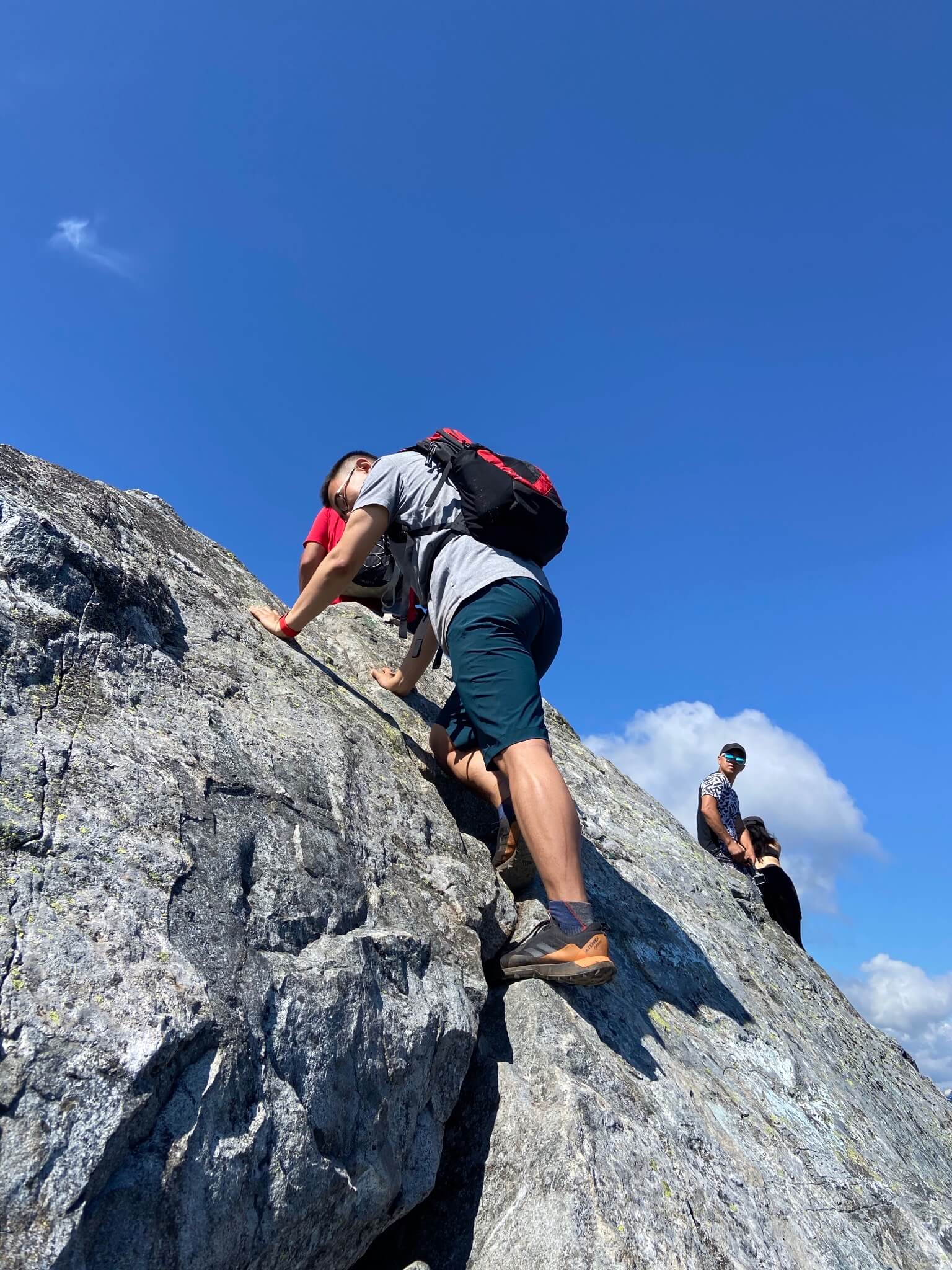 Taken at the top of Crown Mountain, this photo is nonetheless very representative of how challenging the entire ascent was.

The rocky terrains and the steep slopes upped our scrambling game further. We had to fix our body onto the slope with hands, and use the lower body to climb up. We took quite some regular stops along the way, and clocked the hike to the top of Crown Mountain at 4 hours. 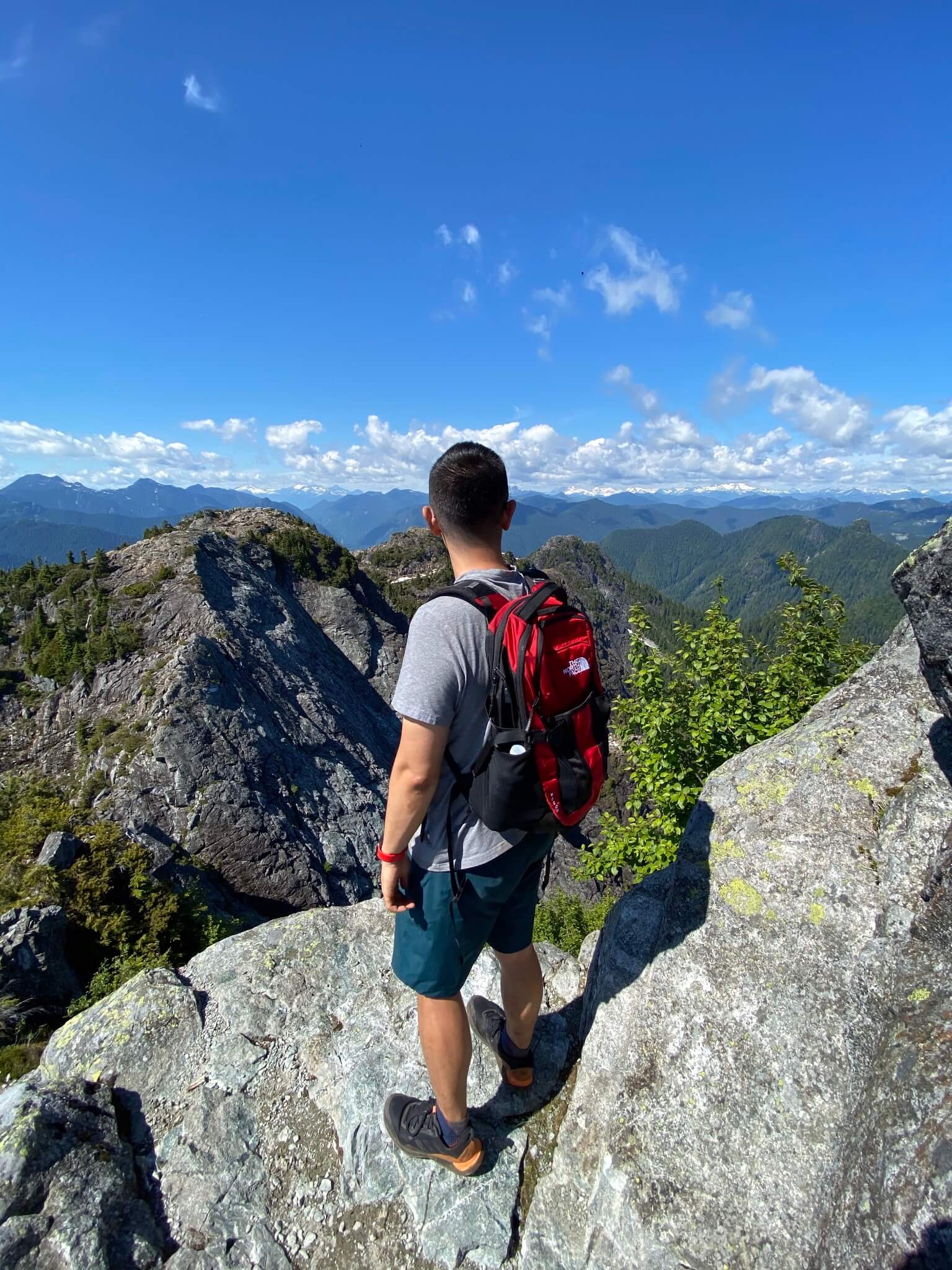 Taken at the top of Crown Mountain, with North Shore mountains in the background. 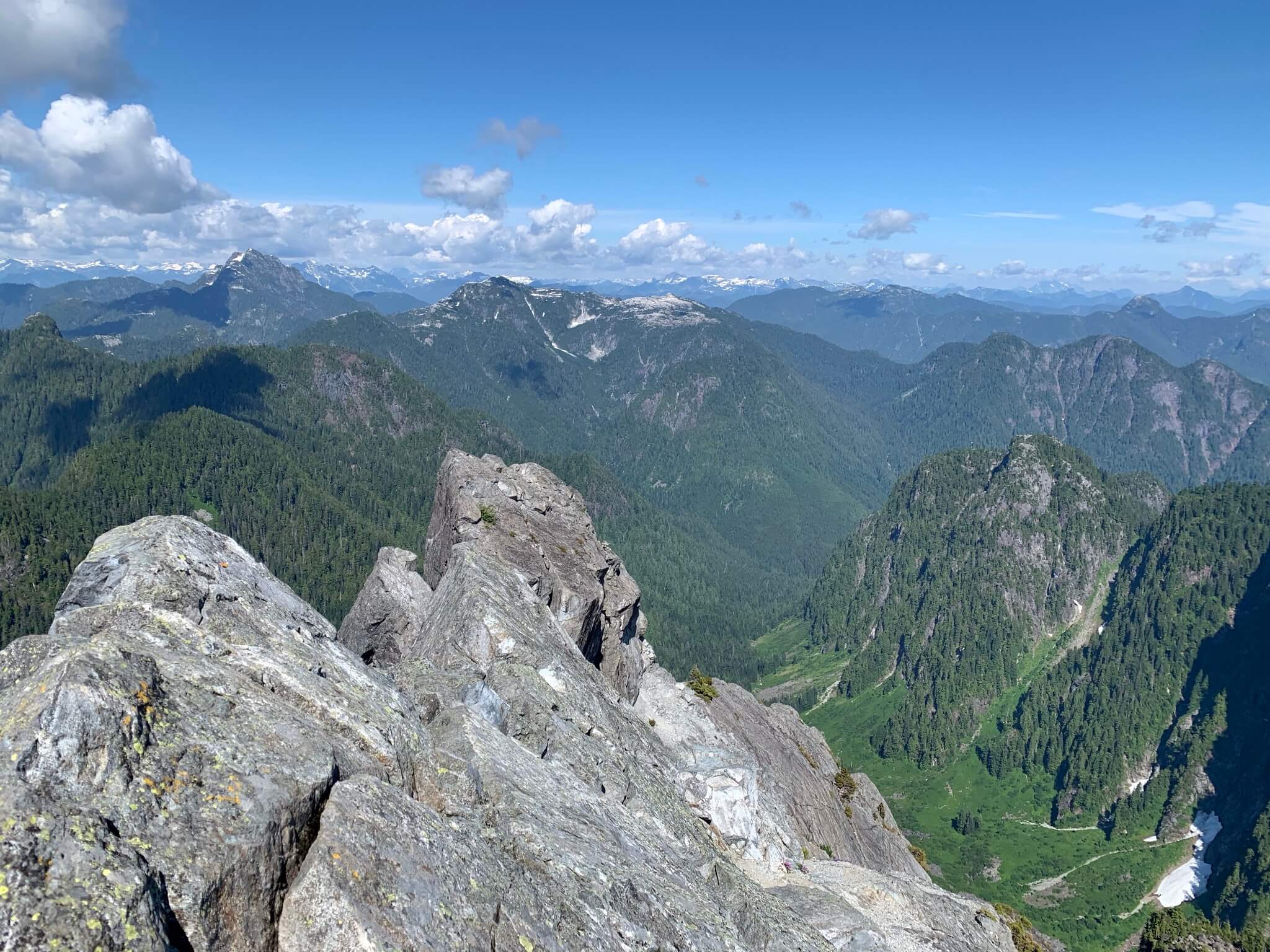 The mountains in the northeast, taken from the top of Crown Mountain.

The views from Crown Mountain were absolutely rewarding. The spot had a 360° truly panoramic view to the cities, as well as to the backcountry towards the north. (The last time I’ve had views like this was at the end of Panorama Ridge.) The ridge along the Alpine Trail and Hanes Valley were majestic and made for some really nice photos.

We decided to head down to where we came, after some 30 minutes for snacks and photo snapping. We mostly wanted to avoid getting sunburned, and part of us wanted to be still on time for Grouse Mountain’s download gondola — we’d reserved a slot 7:30 to 8:00pm, and it was already 4. Descending such terrains was no easy task, and we still took regular breaks. It still took us just minutes short of 4 hours to get back to the Chalet.

One thing was clear to the three of us: now that we’ve done it, Crown Mountain is on the list of trails that we won’t try again. The trail is deceitful with its 9 km distance, and the 900 m total elevation gain isn’t at all prohibiting. But to tread through the steep slopes, using the entire body, and to be careful of where to set foot all the time was quite demanding.