Develop for Shortcuts to Process Images

The Shortcuts app is the official automation solution supported throughout the Apple ecosystem. It allows the user to fit your app into their workflow, and you don’t even have to design UI for the action. 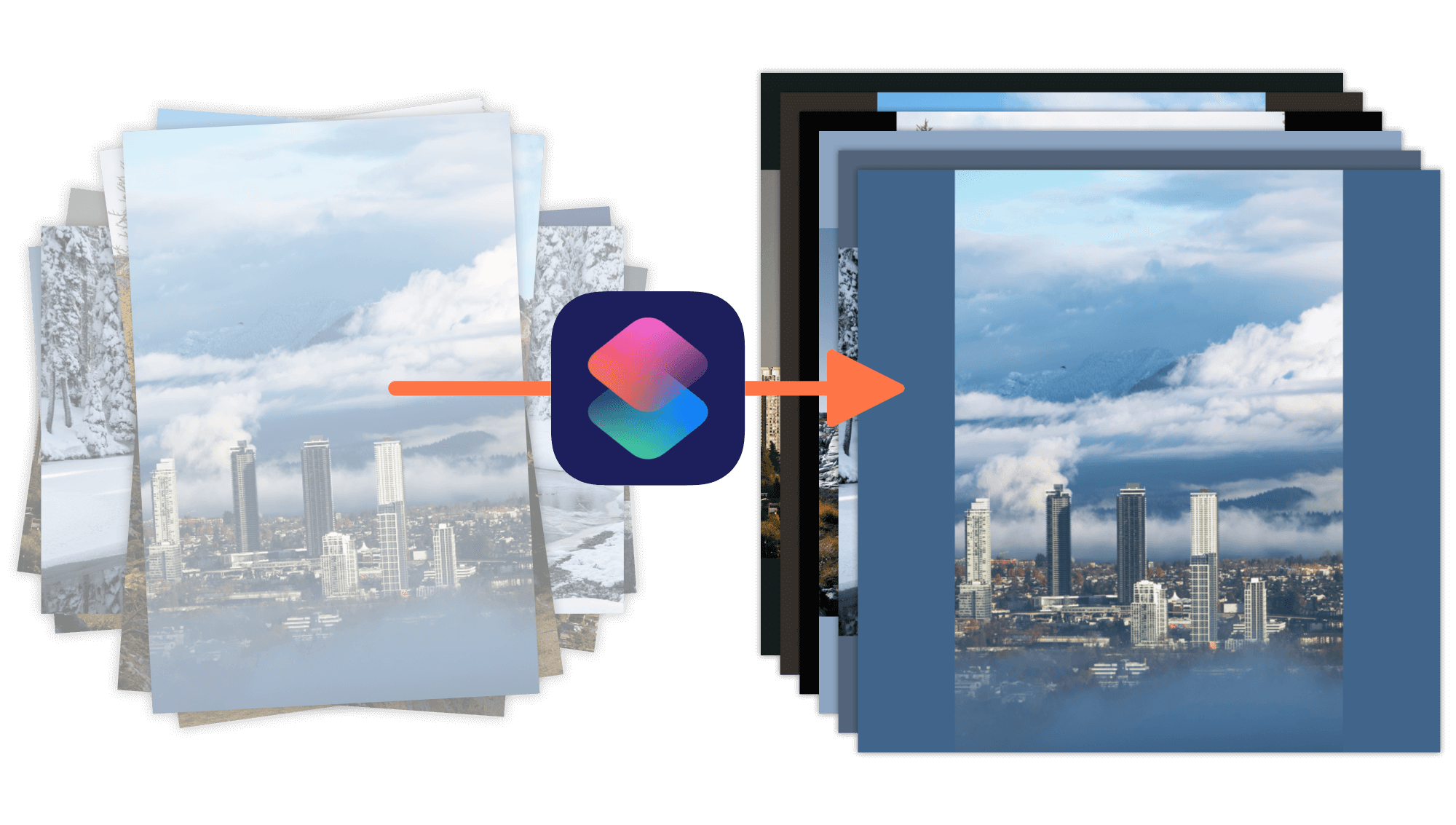 The idea of the Shortcuts action in BORD, my app that un-crops photo and adds adaptive colour backgrounds.

In this tutorial, I will demonstrate how you can develop and expose a Shortcuts action in the Shortcuts app. In my app, BORD, this action adds coloured borders to your photos, so that a 2:3 portrait DSLR photo can fit Instagram’s 4:5 aspect ratio requirements.

For sake of the tutorial, we will develop an action that pass through input as output. However, you are free to do any image operations on the input as you wish.

You Don’t Need an App Extension

Let’s get this out of the way—when developing for iOS 14 or 15, you do not need an App Extension to develop for Shortcuts.

Conventionally, when you search for a tutorial on SiriKit and Intents, you are instructed to go through a step that creates an App Extension. But it’s not necessary (and frankly won’t be a viable route) for our purpose: to develop and expose a Shortcut action that processes photos.

Why are App Extensions not necessary? Starting with iOS 14, SiriKit Intents can be handled by the main app, without an SiriKit Intent App Extension. Without adding an App Extension target to the app bundle, things are easier for the developer (that’s you). Your app can still expose a Shortcuts action, and this action can process input without the app having to open in the foreground.

Why are App Extensions not an option? Also starting with iOS 14, App Extensions are assigned very limited resources. This was aligned with the introduction of iOS Widgets, which are also powered by SiriKit Intents. Once the App Extension reach 30 MB of RAM use, the extension is terminated. This is far below what’s typically required for image processing.

Before we go to coding, there are a few project setups to do.

Now that we have Siri Intents and project set up, we are ready to write some code. There are simply two steps.

The Intent Definition file generated a few classes and protocols:

Now we need to create a handler class to handle the generated intent. To do that, create a new Swift file and use the following code:

Note that in the above code, processInputFile(_:) uses optionals in case certain image files cannot be processed. In the handle(intent:,completion:) method, we use compactMap to directly omit any files that cannot be processed. This passthrough code cannot fail, but it is practical once you operate on image files. You may want to implement your own logic for handling stuff.

Now that you have a class that handles ProcessImageIntent, you need to tell the app which class can handle the processing.

Under AppDelegate, add the following piece:

Now your app knows who to look for when they receive a ProcessImageIntent instance. It will launch without a UIWindowScene instance attached.

Build your app and run it once, so that the app register with Shortcuts in the system.

Open the Shortcuts app on your testing device. Add a new shortcut that looks like below: 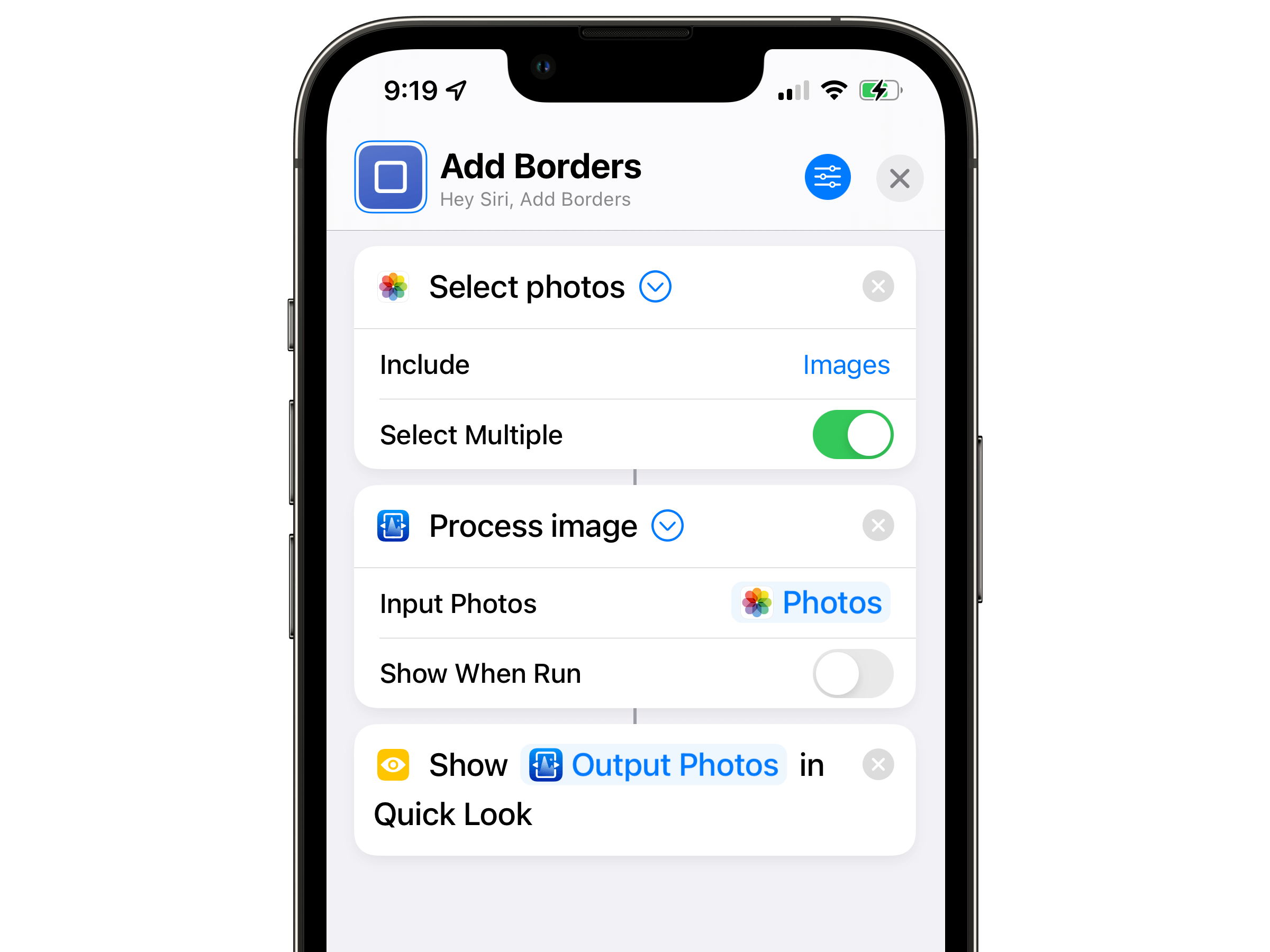 This Shortcuts action works like any other action—it doesn’t open the app in the foreground, and returns your input photos directly as output. You are free to use this action with a Share Sheet–invoked shortcut, too.

When you want to debug the action, you debug it as you’d normally would debugging the main app—run the main app, go to Home Screen, and launch Shortcuts. If you step through code, you can see breakpoints as you normally would.

There you have it!

There are a few steps to polish up your Shortcuts action: